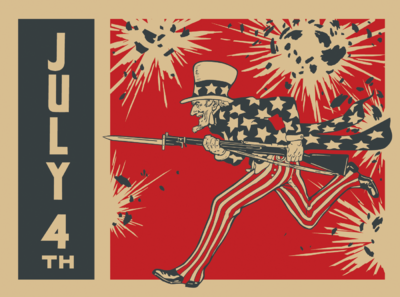 In 1813, the United States gets its nickname, Uncle Sam. The name is linked to Samuel Wilson, a meat packer from Troy, New York, who supplied barrels of beef to the United States Army during the War of 1812. Wilson stamped the barrels with "U.S." for United States, but soldiers began referring to the this food as "Uncle Sam". A local newspaper picked up on the story and Uncle Sam eventually gained widespread acceptance as the nickname for the U.S. federal government. This vintage picture of Uncle Sam is a classic way to remember, our Independence Day.