I took a trip to the florist
On Christmas Eve last year.
And happened by a homeless man
Who's eyes were filled with tears.

He said: "Good sir, I need your help,
I don't seek to deceive.
I buy roses for my mama
On every Christmas Eve."

"But they think I'm invisible,
These florists must be blind!"
He offered up his change to me,
And asked if I would mind.

He'd saved enough for three long stems,
Not much of a bouquet.
But cheerfully he shook my hand,
And then was on his way.

Convinced that I'd done my good deed,
I bought some for my wife.
There were thirty fresh cut roses,
For the love of my life.

Driving past the local graveyard,
I saw that homeless man.
Kneeling beside his mother's grave,
And so I parked my van.

My heart was broken by that sight,
I knew not what to say.
I mindfully approached the grave,
And offered my bouquet,

He said: "You meant those for your wife.
They shouldn't leave your hand."
I said: my wife knows how I feel,
And she will understand.

I placed them on his mother's grave,
As tears rolled down his face.
I was captured by the moment,
Suspended in that place.

Then from behind, a man inquired
If I had been a friend.
I told him: "no, I'm with her son,"
He didn't comprehend.

When I pointed at the roses,
The homeless man was gone.
The stranger said, "You've seen him too?"
Was he putting me on?

He said, "I believe your story.
For I've seen him as well;
On Christmas Eve, six years ago,
A tale I seldom tell."

He said there's something I should know,
And quickly clarified.
"It was back in nineteen eighty,
When this homeless man died."

He came here every Christmas Eve,
Until his final breath.
It's a practice he's continued
These decades since his death.

Sometimes it takes an act of God,
To make someone believe.
And God gave me a miracle,
One special Christmas Eve.

This poem was a finalist in the July 2021 poetry contest 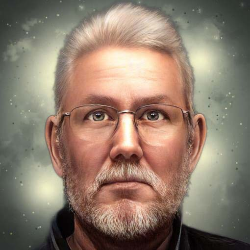